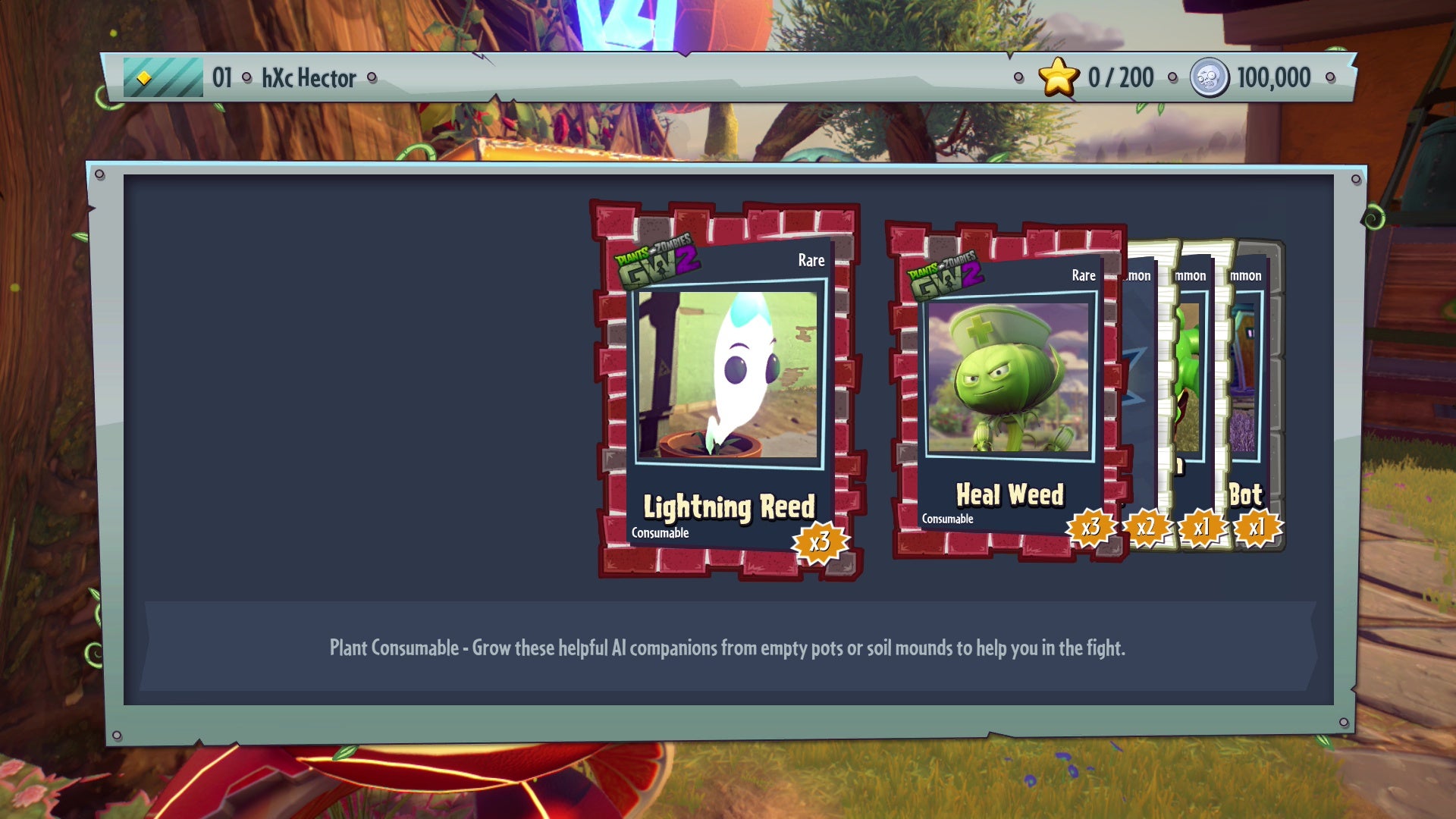 
Plants vs Zombies: Garden Warfare 2 contains a massive amount of Unlockables that are obtained at random through Sticker Packs. Plants vs. Coins are the in-game currency that allow you to purchase sticker packs and unlock characters. This guide will show you how to quickly earn XP.

PvZ: Garden Warfare 2 – How to Get Stars

Plants vs Zombies: Garden Warfare 2 gives players a variety of ways to unlock unique features. While coins have made a return as the standard in-game currency, players can also earn stars to access specific items. This guide will show you how to earn stars and will explain the different ways stars can be used. Stars are primarily used to access or unlock specific items and locations throughout the Backyard Battleground. While coins are relatively easy to accumulate, it takes a bit more effort to obtain and collect stars.

To earn stars, start by accessing the Quest Board in the Backyard Battleground. This is the board found directly in front of the stat rooms on each side of the backyard. Though both plant and zombie sides have their own Quest Boards, the quests on the boards will remain the same, and will refresh daily. The daily quests break down into three main categories: Plants, Zombies, and Multiplayer.

Each quest has different rewards for their completion, which are listed on the Quest Info page on the righthand side. The rewards mainly consist of stars, coins, and XP multipliers. To earn stars, you will need to select and complete quests that have stars as their reward.

The star rewards range between stars, depending on the difficulty of the quest. Quests marked as Epic tend to be more challenging than regular quests, and are marked by a yellow exclamation point. Epic quests often grant no coins, but increase the star reward to 10 stars. Multiplayer quests usually do not offer star rewards. Make sure to accept quests that are from either the Plants or Zombies quest categories that list stars in the reward.

After completing a quest, you can check how many stars you have by accessing the menu. Your stars are listed in the upper right corner of the display, beside your coin total. Quests refresh each day, so keep an eye on the timer in the lower left corner of the Quest Board to ensure you have enough time to complete the quests you want.

Also, keep in mind that you must accept quests and add them to your Active Quests list in order to have your progress count toward the quests. Once a quest has been added to the Active Quests lists, it will remain there until it is completed or removed. Check the Quest Board regularly and prioritize your quest objectives to ensure a steady flow of stars, coins, and XP. We have listed some of the primary ways stars can be utilized in Plants vs Zombies: Garden Warfare 2.

Keep in mind that this game is full of surprises, so you may find new uses for stars as you progress through the game. On both the Treehouse and Mansion sides of the backyard, there are piles of debris or rubble that can only be cleared using stars. After spending a few stars to clean up a pile of debris, you can then select a nice statue or shrub to put in its place.

You will have several statues and shrubs already unlocked early on, and you can obtain more designs by unlocking them in sticker packs. Once debris has been cleared in a specific spot, you can swap between the different designs to change your statue or shrub for that spot without having to spend any more stars. If you have spent some time exploring the Backyard Battleground, you likely have stumbled upon a number of glowing chests throughout the neighborhood.

Each chest has a large star carved on the front, which is a pretty obvious indicator of what you need to unlock each one. When you approach a chest, an icon will appear that indicates the number of stars needed to unlock that particular chest. Some chests cost only 3 stars, while more expensive chests cost 7 or more stars.

The Crazy Targets Range is a new mini-game that can be found within the sewers in the Backyard Battleground. The Crazy Targets Range is indicated by a large door in the sewers marked with a huge gnome and star on the front. Unlocking this door costs five stars, so you will only need to complete two regular star quests to earn enough for the mini-game. There are also multiple star chests throughout the sewers, which tend to cost about seven stars.

We recommend unlocking the Crazy Targets Range first before opening these chests, but you can use your stars how you wish.

An enchanted base will grant you additional coins and XP after each successfully defended wave, similar to the Flag of Power. Sometimes we include links to online retail stores. If you click on one and make a purchase we may receive a small commission. More about Plants vs. Zombies: Garden Warfare 2. A look back on what we tried to accomplish at USgamer, and the work still to be done.

It's time for us to move on, but we'll carry USG with us wherever we go. How to Earn Stars While coins are relatively easy to accumulate, it takes a bit more effort to obtain and collect stars. Clearing Debris On both the Treehouse and Mansion sides of the backyard, there are piles of debris or rubble that can only be cleared using stars. Chests If you have spent some time exploring the Backyard Battleground, you likely have stumbled upon a number of glowing chests throughout the neighborhood.

Enchant Gardens or Tombstones Each Ops game mode begins by planting or erecting a garden or tombstone that will serve as your primary base that you must defend for the duration of the match. Zombies: Garden Warfare 2 Plants vs. Contents Tool. Press Start to Continue A look back on what we tried to accomplish at USgamer, and the work still to be done. Can't be.

Plants vs. Zombies: Garden Warfare is a multiplayer third-person shooter and tower defense video game developed by PopCap Games and published by Electronic Arts. The third game in the Plants vs. Zombies franchise, the basic premise revolves around plants defending humankind from a zombie invasion. In the game, players assume control of either the Plants or the Zombies, as they fight in various cooperative and competitive multiplayer modes. Upon completing matches and finishing objectives, players earn coins to acquire stickers that unlock customization items and character variants.

My buddy and I reimplemented PvZ's first world to Pico-8! shooter game developed by treyarch and published by activision Plants Vs Zombies 2 Full Crack.

The biggest PvZ world is here in Backyard Battleground! Enjoy lots of customizations, go on quests, play in co-op or multiplayer modes, switch teams and challenge friends! Plants vs Zombies Garden Warfare 2 is a great online shooter with an unexpected wealth of single-player stuff, too. The colourful visuals, fun and varied characters, the range of play modes and the collection aspect with the game packs will continue to keep gamers of all ages entertained for hours. Hooked Gamers. Lastly, the upgrade comes with 50 Rainbow Legendary Hat. To report a missing price, please send us an email or use the chat. There are 23 offers ranging from 2. Plants vs zombies garden warfare 2 is a very fun shooting game, its like plants and zombies fight with guns and special abilities.

We use cookies and other tracking technologies to improve your browsing experience on our site, show personalized content and targeted ads, analyze site traffic, and understand where our audiences come from. To learn more or opt-out, read our Cookie Policy. Plants vs. Zombies: Garden Warfare 2 is a deceptively simple shooter — but that doesn't mean it's simplistic.

This is best done with Citron and his orange-looking morphball rolling and boost jump abilities.

Trusted Reviews is supported by its audience. If you purchase through links on our site, we may earn a commission. Learn more. Zombies spin-off as a joke. Well, Garden Warfare 2 is a bigger, better version, complete with more characters, more maps and more modes.

Lo 2 o' -- APPARENTLY, IF SOUND WAVES ATTAIN JUST THE RIGHT NOTE, AND YOU CANT GET FR06S TOGETHER IN HARMONY UNLESS THEY WE BEEN PRE-BURPED.

RELATED VIDEO: How to UNLOCK TORCHWOOD and GOAT 3000 - Plants vs. Zombies Garden Warfare 2

Everything about Plants Vs. Zombies: Garden Warfare 2 seems designed to get in the way of the thing it gets right: giant, instantly accessible team battling on the Internet. If you're looking for an enjoyable evolution of the Team Fortress formula, complete with diverse, complementary character classes and minute battles across staggeringly large maps, this one's pretty danged good—and easily the most kid-friendly team-battling game of its kind. But boy, do EA and Popcap seem to have it in for players in search of that content.

Plants vs Zombies Garden Warfare has many class variants. For the plants, many of them add elemental effects to their primary attacks.

With Plants vs Zombies: Garden Warfare 2, the developers have taken everything that was good about the first game, plonked it in a grow bag, lobbed it in a greenhouse and given it a daily sprinkling with water piped in from Chernobyl. It's kind of like a genetically modified, super-sized turnip that's been grown in a lab. There's lots more here to admire, but it's still a turnip. Mind you, if you like turnips as much as we do, you're going to love this