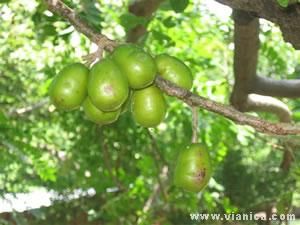 Louis, MO. They are cultivated for their fruits, which look and taste something like a baby mango. For my dissertation research at Washington University, I am studying changes in genetic variation associated with domestication.

Jocotes are an ideal system for examining the domestication process because within Spondias purpurea , several different types of domesticated populations are represented: orchards, backyard trees, living fences, and trees cultivated in forests.

Jocotes also exist in wild populations, although they are rare. Cultivated jocotes in Guatemala. I went to Central America with the goal of collecting as many jocote populations as possible, in addition to multiple populations of Spondias mombin and Spondias radlkoferi. These students were a great help in the field: they had a real knack for spotting jocotes from afar and made beautiful herbarium specimens. Erin documented the types of plants used in the construction of homes, and how people used plants to alter the space around them.

Anna focused on the ethnobotany of various Spondias species. Erin at Lago Atitalan, Guatemala. We began our trip in Guatemala City. After meeting with Analu and Chuck MacVean at the Universidad del Valle, we traveled to Antigua for a few days of intensive language school; this served as our "orientation week".

Antigua was the original capital of Guatemala; the colonial city, with its cobblestone streets, four hundred year-old churches, and quiet plazas, provided a relaxing and enticing introduction to Central America. This calm orientation lasted until our fifth day in Guatemala, when 78 prisoners escaped from a maximum-security prison in Escuintla, 30 miles from Antigua. The police eventually caught twenty-five of the armed escapees.

The remaining armed convicts sought refuge in nearby forests. Needless to say, we avoided these areas and still managed to collect several jocote populations. Antigua, Guatemala. Following Guatemala, we journeyed to El Salvador for a brief but worthwhile stay.

We continued our search for wild jocote populations with Nohemy in two national parks Bosque El Imposible and Bosque de Cinquera. At Bosque El Imposible, we found jocotes cultivated in the forest, in addition to other "native" jocotes locally known as jocote de iguana.

In a small homestead near Pueblo Caluco Dept. Sonsonate , one family was growing four varieties Jocote de chapin, jocote tronador, jocote de succaron, jocote turco. In Honduras, we had the pleasure of working with excellent students from the University of Honduras and the Escuela Agricola Panamericana at Zamorano.

We collected plants near Zamorano, Juticalpa, Comayagua, and Choluteca with various representatives from the University and Zamorano.

We stumbled upon perhaps the most exciting jocotes of the summer in the mountains above Choluteca, in southern Honduras. We had meandered up a nearly impassable rocky road to a place known as El Plan del Jocotes. We drove past a school where the students were outside at recess. They ran to our car, jumped on it, and hung on or chased us on foot as we continued up to Briza del Sur, where the road ended.

The students helped us locate several unusual jocote plants: the fruits were small and very acidic. Despite repeated attempts to eradicate the wild jocotes, the plants were very hardy and were still hanging on. We collected everything we could, and headed back to Tegucigalpa to dry and ship the plants before heading for Nicaragua. Students and residents of Briza del Sur, Honduras. With detailed collection data from Doug Stevens and others, we were able to locate several unique jocote populations throughout the western half of the country.

From Nicaragua, Erin returned to St. Louis for resident assistant training at Wash U. Anna and I proceeded on to Costa Rica to continue the search for jocotes. Jocote de iguana, El Salvador. In our first two hours in San Jose we saw more U. We spent two days in the research station at Santa Rosa National Park before journeying to the capital so that Anna could return to St.

Louis to start the fall semester. Reinaldo hosted us at his home near Rincon, where he cooked tortillas and inadvertently cooked a rat that had crawled under the stove burner and died. Once we arrived at Corcovado, Reinaldo located several populations of jobo Spondias mombin along the trail to Sirena Biological Station.

My friend Anna with a jocote seedling. Panama differed from other Central American countries in that we found no evidence for any wild jocote populations. However, we encountered multiple living fences and the several cultivated varieties. All in all, the trip was a great success! We collected leaf material from nearly individuals: jocote accessions Spondias purpurea and accessions of Spondias mombin , S.

We found multiple varieties of cultivated jocotes, and recorded 40 different common names for Spondias purpurea. We were able to travel largely without incident through these six countries, learning not only about jocotes but also about Central American agriculture, lifestyle, and culture. We were very fortunate to have excellent contacts and guides in every country, without whom none of this work would have been possible. However, by far the greatest joy of the trip was interacting with Central American residents and farmers.

The local people were extraordinarily enthusiastic about sharing both their plants and their extensive agricultural knowledge. They contributed significantly to my research project by helping me to collect material, but more importantly, by allowing me to better understand the cultural context of jocote domestication. Me Allison learning near Rio Moramulca in southern Honduras. Louis, MOE-mail Technical Support. 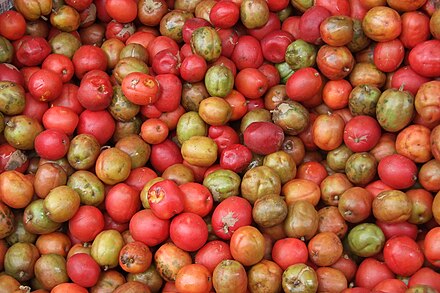 If you love trying new foods, Nicaragua is a great place to visit. As well as some tasty traditional dishes, the country produces a whole range of exotic fruits. These incredibly sweet fruits are often served after dinner. This fruit is turned into a dark brown paste before consumption, usually as a juice. There are many different species of jocote that grow in Nicaragua , with different harvesting seasons. Keep your eye out for street vendors selling bags of jocote at intersections or service stations.

Louis, MO. They are cultivated for their fruits, which look and taste something like a baby mango. For my dissertation research at Washington University, I am studying changes in genetic variation associated with domestication. Jocotes are an ideal system for examining the domestication process because within Spondias purpurea , several different types of domesticated populations are represented: orchards, backyard trees, living fences, and trees cultivated in forests. Jocotes also exist in wild populations, although they are rare. Cultivated jocotes in Guatemala. I went to Central America with the goal of collecting as many jocote populations as possible, in addition to multiple populations of Spondias mombin and Spondias radlkoferi. These students were a great help in the field: they had a real knack for spotting jocotes from afar and made beautiful herbarium specimens. Erin documented the types of plants used in the construction of homes, and how people used plants to alter the space around them. Anna focused on the ethnobotany of various Spondias species.

By clicking register, I agree to your terms. All rights reserved. Design by w3layouts. Anacardiaceae in the Neotropics John D.

It is cultivated in Nicaragua over a hectare area on the west and south slopes of the Mount Santiago volcano, about 20km from Managua.

Spondias purpura is a species of flowering plant in the cashew family, Anacardiaceae , that is native to tropical regions of the Americas, from Mexico to Brazil. It is also very common in most of the Caribbean islands. It is commonly known as jocote , which derives from the Nahuatl word xocotl , meaning any kind of sour or acidic fruit. Jocote trees have been used by the people of Central America for thousands of years, for both food and medicinal uses. The trees are also used to create living fences and to help staunch soil erosion. A sap or gum from the tree is used as a glue and the same material is combined with sapote or pineapple to make a treatment for jaundice.

Genetic diversity in jocote trees is saved by growing them locally

That sounds delicious! Yes I eat a lot of mango! Never saw so many mangoes in one place! Yes, May is a good time for my favorite fruits, but I can get those winter time star apples. I miss the large variety of mangos available. Here is an assortment at the market.

These trees can be found throughout Nicaragua and they start producing Jocote, also called Mombin, is a small fruit ( cm in diameter) that can be.

Nicaragua's Exotic Fruits and Where to Find Them

Article Id publisher-id : PharmacognJ Elufioye Taiwo Olayemi. There are ongoing efforts to identify the chemical composition of plants used as food or medicines in other to correlate their components with the numerous claims of their medicinal usefulness in folklore.

Spondias mombin , also known as yellow mombin or hog plum is a species of tree and flowering plant in the family Anacardiaceae. It is native to the tropical Americas , including the West Indies. The tree was introduced by the Portuguese in South Asia in the beginning of the 17th century. It is rarely cultivated except in parts of the Brazilian Northeast. The mature fruit has a leathery skin and a thin layer of pulp. The seed has an oil content of

US UK. Switching between stores will remove products from your current cart.

In a refreshing twist, humans have been shown to be part of the solution to the issue of decreasing genetic diversity in our world rather than part of the problem. Global genetic diversity is being eradicated through any number of human-driven activities, the removal of large scale forests key among them. Now researchers at Washington University in St. Louis report that farmers and families in Central America actually have saved genetic variation in the jocote ho-CO-tay , Spondias purpurea , a small tree that bears fruit similar to a tiny mango. And they've done this by taking the plants out of the forest, their wild habitat, and growing them close to home for family and local consumption.

State Ceara, Brazil. Spondias mombin plant's leaves in nature. The ciriguela or seriguela, Spondias purpurea; is a tree in the anacardiaceae family. Its fruit is rich in C vitamin.